5 actions YOU can take when you're feeling stuck 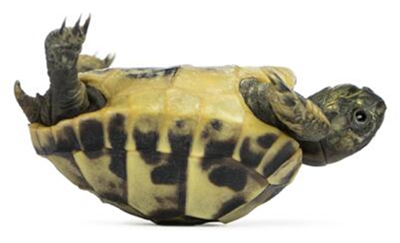 We had a tortoise when I was younger (a long story for another time) but the first time we saw him on his back in the garden, we panicked that he was stuck!

Many of us feel like my old tortoise George on the odd occasion, but sometimes we can get really stuck in feeling stuck!

The thing about feeling stuck is that even if we start by feeling it in only one area of our lives, it can become pervasive and start to feel like we're stuck everywhere.

In reality a feeling of being stuck is just a big alarm sounding: something needs to change!

Let me give you some good news about change:

But here's the bad news:

It was fascinating as a kid to watch George start making tiny little movements, which resulted in him rocking on his shell, then more movements and he rocked more, until he was rocking enough to get his head on the ground & with one final push he would get himself back to the right way up…

We get to do the same as humans: make tiny moves to get ourselves unstuck.

Here are some you could try to get you started:

Each little change will start building up your momentum, and you'll start to see more and more choices available to you that you couldn’t even imagine before

Before you know it you'll be well on your way to change, and that feeling of stuck will be far behind you!

And if you'd like support making that CHANGE, book a chat with me today!